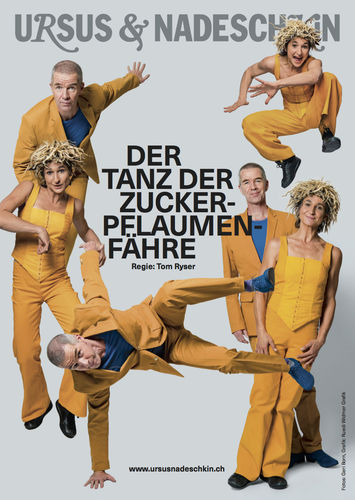 Absurd humor collides with witty theater and bangs you highly inspiring and insanely entertaining to the thoroughly expectant head. Ursus & Nadeschkin are as anarchic as the Marx Brothers, as absurd and profound as Beckett, and have been playing for over a quarter of a century with the unrestricted license to do anything. In DER TANZ DER ZUCKERPFLAUMENFÄHRE (directed by Tom Ryser, Tchaikovsky sends his regards!) every movement, every note and every lost punch line is spot on. The award-winning Swiss precision anarchists are touching, surreal and sometimes so piercingly funny that at the end, when the lights come on, no one wants to leave. 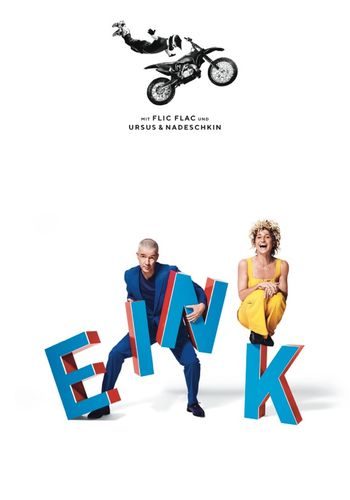 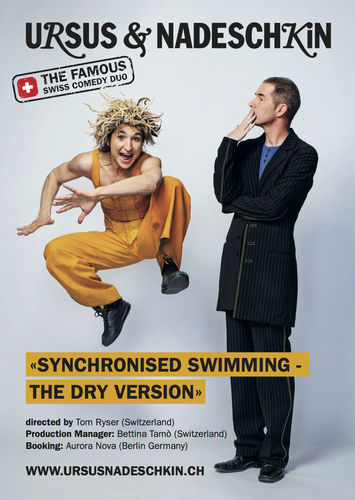 will be performed every day from 2–25 Aug, 2018 @ Edinburgh Fringe Festival

Ursus & Nadeschkin on stage are a neurotic mess, a highly unstable pair obsessed with detail and wordplay. Each evening with U&N offers a fresh and unique performance as improvisations crop up throughout their pro- grams. It‘s impossible to know what‘s rehearsed and what‘s newly sprung from the dynamic they create. The spontaneity we witness has grown out of a long and intense partnership, wherein intuition and experience fuse into a firm confidence on stage. Artistry of many forms, including physical and verbal acrobatics, are skillfully employed as U&N teasingly play to, against, and finally beyond the audience‘s expectations, leaving us surprised as well as delighted by the spell they have woven.

«The show, like U & N themselves, demands to be seen!» (nytheatre.com) «The swiss german Marx-Brothers!» (Village Voice New York) 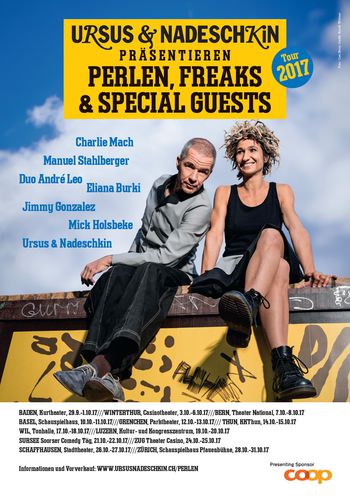 Produced and hosted by Ursus & Nadeschkin, regularly since 1993

For the past three decades, Ursus & Nadeschkin have regularly invited their favorite artists from all over the world to join them for an evening of acrobatics, cabaret art, nouveau cirque, music and comedy. With «PEARLS, FREAKS & SPECIAL GUESTS» they present their audience a wild mix of genres.

Ursus & Nadeschkin: «Pearls, Freaks & Special Guests is like Christmas in July… it's an absolutely selfish production where we bring together all the artists that we personally love to watch perform and with whom we feel like touring around Switzerland for a month…!

«Often an audience is promised one climax after another. Ursus & Nadeschkin do the same for their show “Pearls, Freaks & Special Guests” with one difference: They keep their promise! (Sonntags-Blick, Swiss Newspaper) 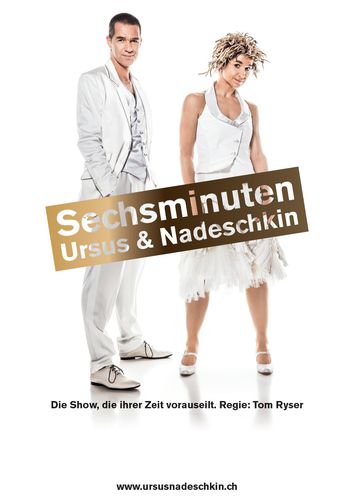 Ursus & Nadeschkin are searching for the perfect show.

Ursus & Nadeschkin’s new stage production (director: Tom Ryser) is by far a piece of pimped-out theater: It starts off incredibly well, breathtaking, spectacular and ends sooner than you would of liked it to. The curtain falls and the performance begins when you expect everything – or nothing anymore. A night full of plot twists, bizarre top and flop ideas – a path between brilliantly absurd or just completely insane humor.

«SECHSMINUTEN expresses experimentation, transition and desperation. During the persistent parts, there were repeated scenes spoken in multiple languages that kept it particularly challenging for it to be understood in spoken mother tongue. »
(NZZ Zurich, 07/ 09/2012)

This Show is being performed in Switzerland, Austria and Germany at the moment. 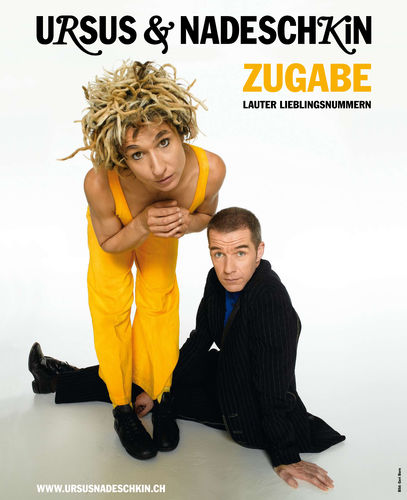 From and with Ursus & Nadeschkin

Duration: appr. 90min (with or without intermission)

Light/Sound: Gerrit Sardemann/Toby Müller
has been performed since November 2009,
the premiere happened along the way …

THE ENCORE is a best-of collection covering 22 years of Ursus & Nadeschkin.
These are little vignettes from their various shows, which have matured over the years, so that they can throw them at you at the speed of light - stutter, quarrel - and coincidently land in total synchronicity.
When Ursus and Nadeschkin are dancing in an endless loop, when they are lost in details, or unexpectedly perform throughout the intermission they find themselves closer to the sophistication of the Dadaism of Waiting For Godot. If at any time the connection to the stage is lost, well maybe then the moment is here, where you, dear audience, have to look after yourself again.

For everyone who has experienced the past 7 productions, this 8th is a must, and for everyone else as well!

This production is touring in Switzerland, Germany and Austria.

DIGGING IN THE ORCHESTRA PIT 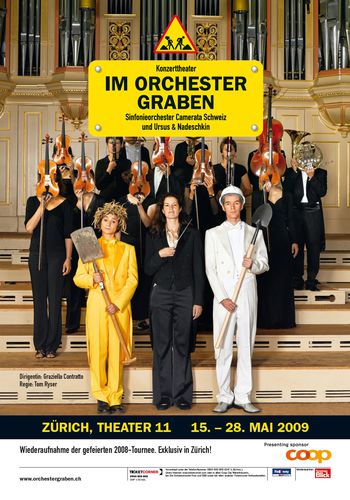 Beethoven’s famous «TaTaTaTaa» Symphony is the centre of tonight’s program, performed by the Camerata Schweiz under the baton of conductor Graziella Contratto. A completely normal concert, if it weren’t for the appearance of two who are quite out of place in this environment: Ursus & Nadeschkin.

Two comedians, who think they know more than they actually do about classical music, take on the task of trying to explain the rules of the symphony orchestra to the audience.
With their questions the concert stage is transformed into a playground for ludicrous experimentation: What is missing, when the conductor is missing? Are section sheep really limelight hogs in disguise? When does the score become choreography? Can you sightread comedy? What is a sense of timing? And who exactly is this Beethoven character?
The answers are anything but reassuring... One thing is however certain: The audience experiences an evening where the symphony orchestra, with Beethoven’s masterpiece, completely outdoes itself. The public witnesess Classical and Comedy meeting on the concert stage to „dig in the orchestra pit“ together.

The plot is based on this uniquely simple and fun idea, and while it is highly entertaining with plenty to laugh, it is also an educational experience introducing the way a symphony orchestra is organised – and how Beethoven structured his 5th Symphony.

Digging in the Orchestra Pit is a contemporary, innovative and highly sophisticated work. It is a story with universal themes that works well with larger audiences and is suitable for all ages from 10 years onwards.

«I reckon noone has ever smiled so much whilst humming.» Blick 2008 (largest paper in Switzerland)

For more infos check out: http://www.orchestergraben.ch 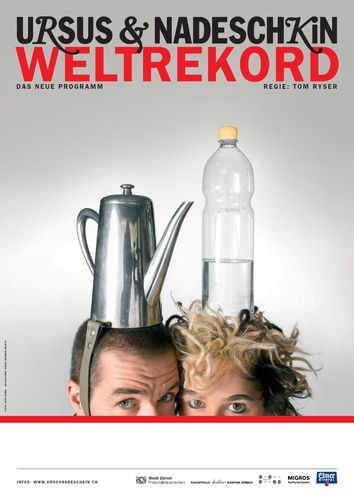 During their new stage performance, Ursus & Nadeschkin are carrying themselves in an unusually nice way. But still, they’re hilariously funny and as preposterous as ever. Different, so to speak. As always.

Will Nadeschkin set the theatre on fire to finally make the extraordinary, the clearly unexpected happen? Because this is the goal of the newest and by now sixth program created by the unique stage pair called Ursus & Nadeschkin in the eighteenth year of their career. By the end of the evening they will not only have fulfilled their aspired quest (and also have failed by doing so), but have chosen a surprising path the audience won’t forget that easily. In fact, the new performance by the two professionals in team with their director Tom Ryser sets a standard that cannot easily be matched by anyone.

»He sets conventions, she defies them; he thrives for the big picture, she needs identification. The American press calls them “the German Marx Brothers” and during the honoring speech for the “Deutsche Kleinkunstpreis” they, the part time silent ones, are praised linguistic acrobats. There lies no contradiction. Ursus & Nadeschkin are all of this and more, but first and foremost “new”.«
(by Daniele Muscionico, "Neue Zürcher Zeitung")

This production was touring in Australia, Switzerland, Germany and Austria. 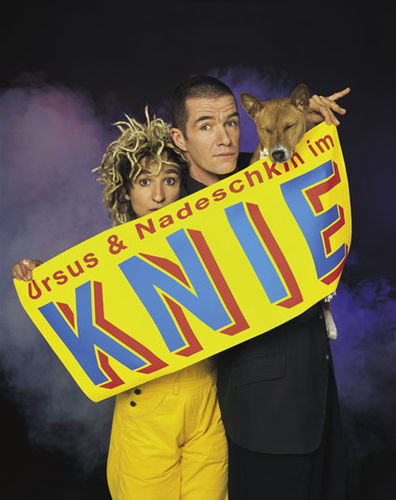 from and with Ursus & Nadeschkin
Authors: Sieger/Wehrli/Ryser
Première 20 March 2002 in Rapperswil, followed by 267 shows in 8 months

«…the program 2002 earned a long standing ovation.
The family Knie are first and foremost grateful to a naughty comedian with dreadlocks and a yellow overall, and her comedian partner, dressed in mouse grey and with ultra short hair. They captured the audience right from the start. Ursus and Nadeschkin are the “reprise clowns” who play and improvise with the audience and they mix the circus life with the slang of daily life in a unique way. The audience ate out of their hands with glee.”
(Tages-Anzeiger, (Swiss Newspaper) Zurich, 2 May 02)

This production was touring exclusively in Switzerland! 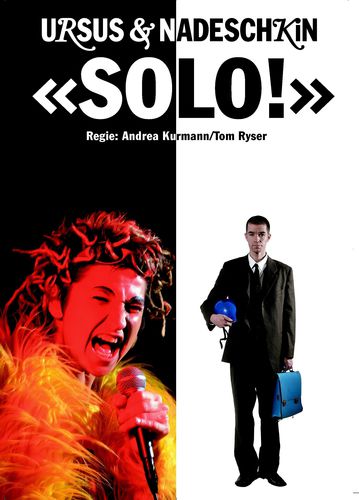 Has been performed in English and German over 140 times

In their latest program, U&N suffer from "acute synchronisation" (!) after 14 years of intense partnership. Their remedy is to split and offer solo shows: simultaneously but still sharing the same stage!

Spectators enjoy two very different programs at once, although one may, from time to time, feel like they are sitting "on the wrong side of the theatre," according to our jealous stars. They (and us) quite enjoy their fighting for and over us as they battle with each other on many grounds. The intensity and intimacy of the bonds between them are exposed as the competition peaks and is finally, surprisingly, and most humorously resolved in a tour de force.

This production was touring in NYC, Switzerland, Germany and Austria. 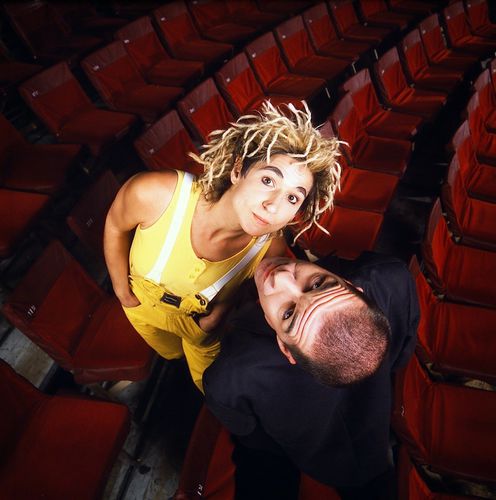 THIS IS THE ONLY SHOW WE PERFORM IN ENGLISH AT THE MOMENT!

Has been performed in English and German over 700 times

"Synchronised Swimming - The Dry Version" is about a man and a woman’s struggle to make you feel good.

Ursus & Nadeschkin onstage are a neurotic mess, a highly unstable pair obsessed with detail and wordplay. Each evening with U&N offers a fresh and unique performance as improvisations crop up throughout their programs. It's impossible to know what's rehearsed and what's newly sprung from the dynamic they create. The spontaneity we witness has grown out of a long and intense partnership, wherein intuition and experience fuse into a firm confidence on stage. Artistry of many forms, including physical and verbal acrobatics, are skillfully employed as U&N teasingly play to, against, and finally beyond the audience's expectations, leaving us surprised as well as delighted by the spell they have woven.

«The show, like U & N themselves, demands to be seen!» (nytheatre.com)

«If anyone is disappointed that Lano & Woodley aren't performing this year, Ursus & Nadeschkin from Switzerland are very much in the same spirit of comedy. Their show meanders chaotically through several different kinds of performance art including dance, bilingual joke-telling, juggling, singing, drumming and fine art visual gags. Highly recommended!» (Melbourne Comedy Festival)

A CD in German has been produced of this program as well.

This production did perform exclusively in NYC and Melbourne

ONE STEP BEYOND - THE FASTEST SHOW OF THE WORLD 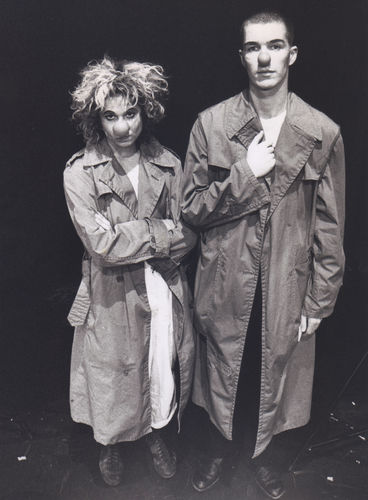 Performed in English and German over 300 times

"One Step Beyond" is the fastest show in town! Or is it? All appearances are deceptive here. With a brilliant opening of juggling, acrobatics, and fireworks, we are quickly entranced, only to find that in six minutes, the show is over! None of us can think of leaving ... and then the real theatre begins, with curtains closed, our expectations suspended. Audience reaction determines much of the show. What is offered in the remaining time varies from evening to evening. Breaking all the rules, this impudent show has more substance to it than the opening razzle-dazzle suggests. Bringing the story full circle, the surprise ending has us seeing the opening once again ... but this time from the backstage point of view!

This production was touring in London, Switzerland, Germany and Austria.

Performed in English and German over 400 times.

U&N involve the children in stories that evolve through audience interaction. This is a piece with no beginning or end, about the lives of two clowns who love and struggle with each other because they need each other. Suspense and excitement rule the day.

This show was performed more than 20 years ago, and toured in Switzerland, Germany, Austria and Italy. Although this seems to be a very long time ago, we still like to list it, because it was the start of Ursus & Nadeschkin!